Back to Herefordshire in the Great War

The munitions during the First World War

Images and documents relating the workforce of the Royal Ordnance Factory, Rotherwas, Hereford during the First World War.

The site opened in 1916 as a munitions filling factory and became one of the largest explosive filling sites in the UK. It covered more than 300 acres and comprised more than 370 buildings. Employing mainly women, the site was bombed during the Second World War, in 1942, and suffered a major explosion in 1944.

The project named ‘Rotherwas R.O.F. - Front Line Duty’ will mark 100 years since the factory opened in 1916. It will focus on the impact the factory complex had on Hereford and the women who worked there - more information on this project is available by clicking here. 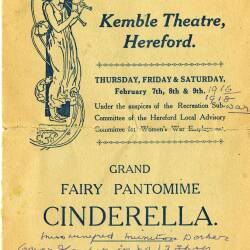