Back to Ross Gazette stories

Ursells - Memorial Masons of Ross since 1885

A folder of photographs was brought in by Richard Andrews on 18th January 2019, when he was interviewed for the Ross Gazette Archive project. The folder contains a number of photographs relating to Richard's work at Ursells in Ross-on-Wye.

Richard worked for Ursells as a monunental mason from 2nd January 1956 (age 15) until his retirement in 2001.

He began as an apprentice (his apprenticeship lasted for four years) and he ended up running the company on behalf of the Ursell family for a number of years.

The photographs show the Ursells yard in Cantilupe Road and several of the projects that have been completed over the years. 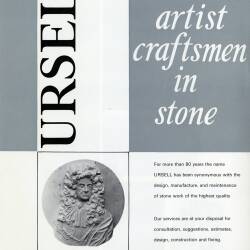 RGU020 Statue of Apollo being erected in g

RGU021 Statue of Apollo being erected in g